I have UK ISA account with stocks. It contains a mixture of OEICS, investment trusts, and individual shares. Do I have to report it as PFIC and how much would it cost?

OEICS are collective investment schemes that are treated in the US as PFIC.

In this example, each trust or unit share must be reported on a separate form 8621. If preparing 3 or more forms, they are eligible for a 20% discount.

Contributions to the UK National Insurance system withheld from your paycheck or made on self-employment income are not deductible from the US taxable income and do not qualify for the foreign earned income credit.

You can check your record of UK National Insurance contributions here.

Contributions to National Insurance system make you exempt from contributions to the US Social Security system that otherwise would be required in the US on self-employment income.

If you have Social Security credits in both the United States and the United Kingdom, you may be eligible for benefits from one or both countries.  If you meet all the basic requirements under one country's system, you will get a regular benefit from that country. If you do not have enough work credits under the U.S. system to qualify for regular benefits, you may be able to qualify for a partial benefit from the United States based on both U.S. and U.K. credits. To be eligible to have your U.K. credits counted, you must have earned at least six credits under the U.S. system.

Although the agreement allows the Social Security Administration to qualify for U.S. retirement, disability or survivor benefits, the agreement doesn’t cover Medicare benefits.

US Social Security benefits received by US citizens and green card holders residing in the UK are exempt from tax in the United States and are taxable only in the UK.

UK State Pension and other payments received under the National Insurance legislation by US citizens and green card holders residing in the UK are taxable in both countries.

When a US citizen/green card holder is a participant in a pension scheme established in the UK:

However -  exclusion of contributions to the pension scheme is not mandatory. You may report those contributions on Income > Wages > Income Outside of the U.S. tab, question -Did your employer contribute to your pension plan? to have it added to your annual taxable income. 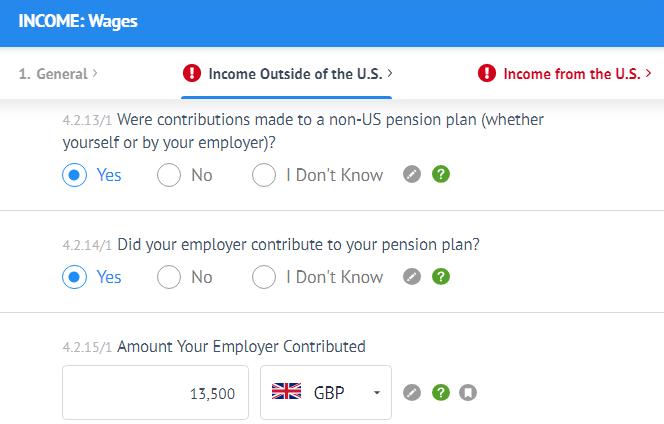 Considering the high tax rate paid in the UK on earned income, added employer contributions may still leave you tax-free in the US. Your benefit: the added amount will be considered previously taxed - which will reduce the taxable portion of pension payments in the future.

Pensions and other similar remunerations paid to US citizen/green card holder residing in the UK are taxable in both countries.

However, you can eliminate the burden of double taxation. Taxes paid in the UK on pension income are applied as a foreign tax credit against tax owed on the same income in the US.

Self-Invested Schemes (such as ISA)

Individual tax-deferred saving accounts arrangement (ISA) do not qualify for income deferral in the US Income earned on those accounts must be reported on U.S. tax returns. 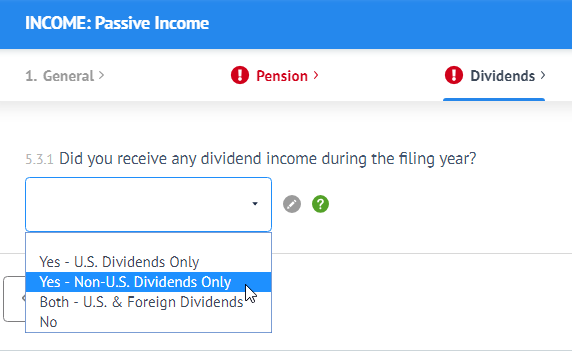 US green card holders residing in the UK may elect to apply what is known as the tie-breaker rule of the US/UK Tax Treaty and be deemed a resident only of the State (i.e., country) with which their personal and economic relations are closer (UK).

Under such an election, the individual would file form 1040NR and report only income derived from U.S. sourced. The requirement to provide full disclosure of foreign bank accounts remains and tax on income from U.S. sources will be higher than the tax on the same income when applied to US residents filing form 1040.

SIPP is an individual pension plan. UK pensions plans are IRS-qualified, whether it is the employer-sponsored or individual plan. Therefore there is no need to report it as foreign trust. Income in SIPP can be deferred like income in a U.S. IRA account.  Interest in SIPP does not need to be reported on your US tax return.

Did this answer your question? Thanks for the feedback There was a problem submitting your feedback. Please try again later.